Posted on September 9, 2012 by isabelsmyth

Chef Dany is preparing a delicious meal of his famous stuffed ‘Chiles en Nogada.’  This dish is often served at festive times, and is a special mixture of nuts, dried fruit and ground beef. Served with a walnut cream sauce & sprinkled with pomegranates.  Vegetarian option available.

Make sure you git on over to see

The Next Great Production at Teatro Luna Azul

Friday and Saturday will have dinner available

There will be two Sunday Matinee shows

No meal these days,  You’ll be home before dark!

Tickets available at Tecolote Bookstore. Show only: 250 pesos.  300 pesos at the door

Dinner Theatre – 500 pesos.  Must buy in advance at Tecolote Bookstore.

Join our growing, supportive ensemble theater group who dare to say ‘yes’ to more fun and creativity in their lives.    Learn performance techniques from skilled professionals.

Bring your talents and ideas – we’ll explore them in the workshop, then shape them into a fantastic show for the whole community to enjoy.

(or talk to us, and we will find a way for you to join in)

We have a great play planned for next March at Teatro Luna Azul.

Lots of crazy characters from a small town in Texas.  You could be one of them!

Big and small parts.  Young and old, men and women.    If you can listen to some movies or youtube of people with southern or Texan accents, that’s about all you could do to prepare.

Auditions will be held on Thursday January 2nd at Teatro Luna Azul at 2pm.

Come to have fun!

Invitation to Our Friends, Neighbours and Community

Posted on December 9, 2019 by isabelsmyth

Come meet and mingle with old and new friends, and find out what’s happening next season at Luna Azul.

We are pleased to welcome the very talented Robert Drake, who will entertain us with his beautiful classical guitar.  His music includes latin jazz , with  beautiful spanish guitar arrangements using  Brazilian, cuban, flamenco, and swing rhythms. 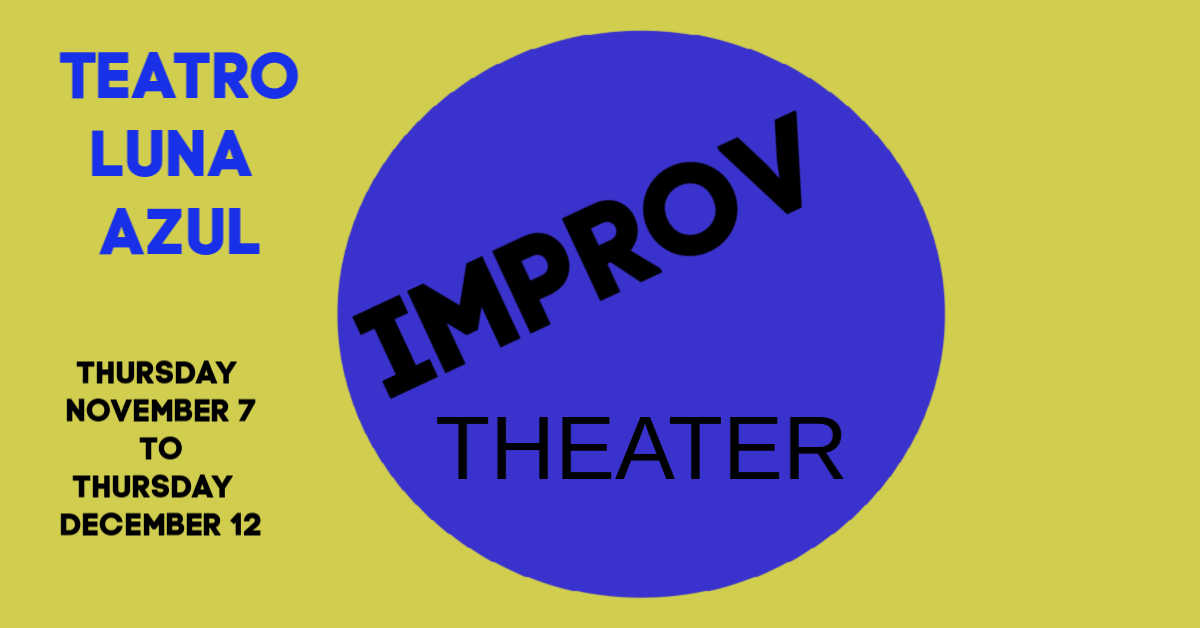 Come play with us!  Join our Fun-Tastic group of Improv Players.  No experience needed.  Just an open and playful mind.

For more info write us at:  bluemooninbaja@yahoo.com

We are pleased to announce a puppet workshop in the month of May.  This will start from a story that you bring in.  Next we will turn it into a script.  Then we will make the puppets based on the characters from the story. The final sessions will be creating the puppet show, to put on for a friendly audience.

Schedule: Every Friday in May from 2-4pm

There Are No Mistakes Only Opportunities!

Improvisation is one of the core techniques used by actors. It stretches the imagination, sparks spontaneity and can lead to unforgettable performances.

Join us for our next set of Improv classes and give your imagination a stretch!

Acting Up! Acting Out!

Come and get your silly bone tickled
and your imagination awakened.

Dillon Porter (last seen at Teatro Luna Azul as Robbie in The Wake) will be leading a two hour workshop for aspiring actors.   The class will cover the basic tenets of comedy and explore them using game play to sharpen the actors’ tools. We will cover Farce, Irony, Parody, Pastiche (‘spoof’), Satire, Slapstick, Surrealism and Wordplay.   Keeping in mind that the audience wishes to seek amusement, we must first amuse ourselves.

Please email us to confirm your space:  bluemooninbaja@yahoo.com
Come prepared for movement as there will be a physical warm-up to start. Dress accordingly and bring water.
Dillon Porter received his Theater degree from Northwestern University and worked in Chicago at Steppenwolf, The Lookingglass and the Goodman. Upon being cast on broadway in The Ritz he moved to New York City and lived there for eight years. The highlight of his time in New York was directing several productions of ‘Shakespeare in da Club’ at Webster Hall. He has appeared in four feature films most notably Bastards Y Diablos and Blue Highway. Dillon is currently developing his next show Whitman in the Wild for the end of April here in Todos Santos.